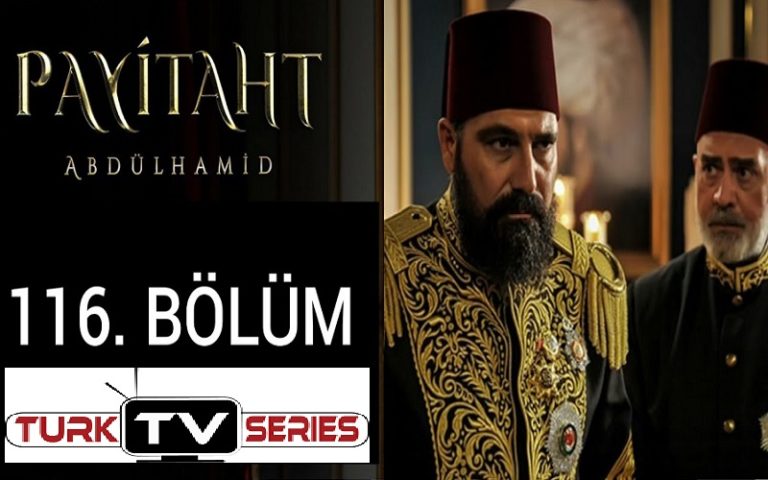 In Payitaht Abdulhamid Ep 115, Sultan Abdulhamid and Pahas go to the mosque to take part the cremation, but someone breaks off Hunkar`s car. Tahsin Pasha comes out of the car to tackle the situation. Meanwhile, arrangements are made for the cremation of Mahmud Pasha in the palace. After this event, Hunkar goes directly to the graveyard instead of Mosque and pleads for Mahmud. After that, Hunkar and Ahmed Pasha sit in the car. Tahsin pasha attends the journalists and informs them about the facts about the murder in the palace. Goldschmidt reaches to Hechler and informs that there is no detonation in the mosque. Hechler retorts with this situation and tries to comprehend why Sultan Abdulhamid did not go to the mosque. Goldschmidt tells that  they had taken the dynamites from the mosque. When Hunkar was coming back to the palace, it reveals that it was Mahmud Pasha who ceased them. Mahmud Pasha says Hunkar why he asks Hunkar why he escaped from there and tells him facts about Farida. Mahmud Pasha tells that Hechler, Frida, Karasu and Sabahaddin are involved in this task and asks authority from Hunkar to continue this fight. Hechler ploys to kill those surrounding Hunkar to take revive on Sultan Abdulhamid. Dilruba secretly listens to Bidar and Naime talking about Ali Nureddin.

In Payitaht Abdulhamid Ep 115, Halil Halid tells Hunkar about the dynamites and Hunkar realizes that Mahmud Pasha was saying truth. Later, Hunkar asks Ahmed Pasha to instruct the soldiers who will go to Aqaba and educate them irregular war expedients. Tatar is furious that he cannot find dynamites. Halil Halid reaches there and tells them to search for Namik. Mahmud Pasha goes to the British embassy and talks to Hechler. Hechler tells that the Russian and Austrian rulers will congregate and interlude for the decisions that will come from this gathering. Doctor Andre carry on to experiment with the kidnapped people. Zishan tells her husband`s name and this worries Madame. Hunkar suspects Ismail Pasha as he does not come to the funeral.  Hechler and Goldschmidt talk about the outcomes of gathering of rulers.  Madame inquires Marco about Zishan. Meanwhile, Dilruba reaches the society and reveals Ali Nureddin`s true identity. This news makes Madame very upset. Halil Halid and envoys find Namik. Halil Halid inquires about dynamites, But Namik refuses.  Soghutlu gives a pirate poison and tricks him.

In Payitaht Abdulhamid Ep 115, Ahmed Pasha educates his warriors new things about intelligence and war strategies. While Frida and Mahmud Pasha are In embassy, meal made of swan meat is ordered by Mahmud .The meal comes to them in the embassy. This thing angers an employee of the embassy.  Mahmud Pasha cannot comprehend why this is wrong, Hechler comes to talk to Mahmud. Hechler expresses that eating swan meat is forbidden under British law and tells that Pasha should be penalized. Mahmud Pasha accepts this preposterous situation and goes to the jail of the embassy. Namik reaches Goldschmidt`s photographer shop and Tatar realizes this.  Goldschmidt tells Namik to bring his soldiers together because there will be detonations in three different places. Tatar Bey follows Namik.

In Payitaht Abdulhamid Ep 115, Namik understands this situation and an armed fight begins. Namik captures Asaf and threatens envoys. Namik requests the cure from Soghutlu, but what Soghutlu delivers him is real poison. Namik falls to the ground and dies soon. Naime approaches to her sister`s room and reads the letter her sister wrote to her husband. Then Naime reaches her sister and talks about the Ali Nureddin`s gift.  Madame tells Doctor Andre to find a cure against the virus. When the guests leave the palace, Zekiye Sultan inquires Naime what she meant. Bidar Sultan tries to calm her, but Zekiye continues to ask questions. Naime tells that she knows why her elder sister reached that house and talks about her wedding. While Hunkar and Zuluflu Pasha are having coffee, Ismail Hakki reaches and brings an album. This album is about the lineage members. Hunkar talks about his ancestors and presents album to Zuluflu Pasha.

In Payitaht Abdulhamid Ep 115, Mahmud Pasha starts searching for the hole in the jail that Ahmed Pasha pointed out. Shehzade Abdulkhadir presents a gift to Meziyet and talks to her. Bidar Sultan enters Zekiye`s room and make an apology  to her for Naime. Zekiye sultan tells that Bidar Sultan is much involved in her children`s lives and it is very necessary to protect them.  Austrian, British and Russian diplomats come to the palace to talk to Hunkar. Russian envoy talks about the problems in Rumelia. Hechler tells that Christian people do not have sufficient representation and economic freedom.  Hechler then tells that the Ottoman charter should come into force again. This thing angers Hunkar and he says that Hechler has crossed the limits.  Bidar sultan gets into the Abdulkhadir`s room and talks to him. Abdulkhadir requests his mother to guide him how to make the right decision and talks about the Meziyet. Hunkar calls Pashas and talks to them regarding the Ottoman charter. Hunkar describes why the previously selected Parliament could not work well and wrong events due to the subordinates.

In Payitaht Abdulhamid Ep 115, Hunkar tells opening a new parliament will distress the country.Hechler goes to jail and talks to Mahmud Pasha. Hechler informs Mahmud Pasha about the decisions of the gathering held in Murzsteg and opening of a new assembly. Mahmud Pasha does not believe him and says that it is impossible. Hechler tells that the troops who will go to Aqaba will be misused and it will put Ottoman in critical situation. British will interrupt and make use of the situation. After that Hechler writes a text for newspapers to make a fake news. Naime makes an apology to her sister but Zekiye Sultan does not believe her. Zekiye says her that she has experienced everything because of her daughter. Marco informs that Zishan is expired and Madame instructs him to take her body to her home. Halil Halid reaches Goldschmidt`s shop and tells, he wants to talk t o him. Goldschmidt tells that he will capture a picture of Halil Halid, but the poisoned arrow coming from camera knocks Halil.

In Payitaht Abdulhamid Ep 115, Ahmed Pasha  says the soldiers that they will reach Aqaba and integrate civilians against the British army.  Zuluflu pasha and Hechler line ups to open the assembly.  According to this scheme, Zulflu Pasha will scare the soldiers who will go to Aqaba and dispatch the soliders to Thessaloniki. The soldiers will steal the British Bank in Thessaloniki and British will capture the soldiers. Thanks to this incident, the British will be able to intervene in the Ottoman empire.  Meziyet escapes from the palace secretly. Shehzade Abdulkhadir follows Meziyet and captures him. Shehzade Abdulkhadir wants to take back Mezyiet to the palace and desires to be with her. Owing to the news in the newspaper, distress starts between the soldiers. Mahmud Pasha absconds from the prison using the hole in the prison wall.

In Payitaht Abdulhamid Ep 115, Mahmud pasha after escaping from prison meets with Ahmed Pasha. Mahmud Pasha informs Ahmed pasha about Hechler`s scheme. Zuluflu Pasha encounters with a group of soldiers at the harbor and says them to go to Thessaloniki to rescue themselves. Goldschmdit seizes Halil Halid and talks to the men`s of Namik. Tatar and enovys enter the photography shop but cannot find anyone there. Nadir opens a confidential door, and the envoys continue to move there. Ahmed Pasha and Selim reach the port quickly, but the soldiers have hitherto boarded the ship to Thessaloniki. Goldschmdit tells that he will explode the places of worship using dynamites. Ahmed Pasha  reaches to the palace and informs that the troopers have gone to Thessaloniki. Hunkar comprehends why this scheme was made and asks to increase the bank security secretly in the Tessaloniki.  Zuluflu pasha tells to the troopers  again because they did not go to the Tessaloniki.The sentinel sent by Naime tells that Zishan is expired and delivers the note that the woman found at her home.

In Payitaht Abdulhamid Ep 115, Madame Blavatsky tells that anyone who adjoins Zishan`s body will be ill and orders the newspaper to write that Zekiye is accountable for this assassination.  Hechler and Zuluflu Pasha meet again, but thanks to Hechler`s deceit, he assassinate the agent chasing Zuluflu. Zuluflu Pasha tells that he did not send the troopers with oppression to Thessaloniki because Ahmed Pasha already knew everything. Sabahaddin and Karasu return to Payitaht and Frida tells them everything that is happening. Sabahaddin tells that his father did not deceive and that he was playing with British.  Hechler orders the soldiers to capture the Pashas, including Ismail, Zuluflu Pashas.  Halil halid  detach his hands and discovers where the dynamite goes. Goldschmdit orders to explode and there are three detonations in Pera. Tahsin Pasha informs Hunkar that the explosions in churches and Pashas were captured.  Hechler presents Hunkar a document depicting that the detonations in the Churches were made by Pasha`s orders. Hechler told Hunkar to open the assembly immediately.

Without ads, permanent access to Payitaht Abdulhamid Season 4 Episode 116 and many more can be achieved by subscribing membership on Multipoint TV by Clicking below button.

Have you Enjoyed Episode 116?