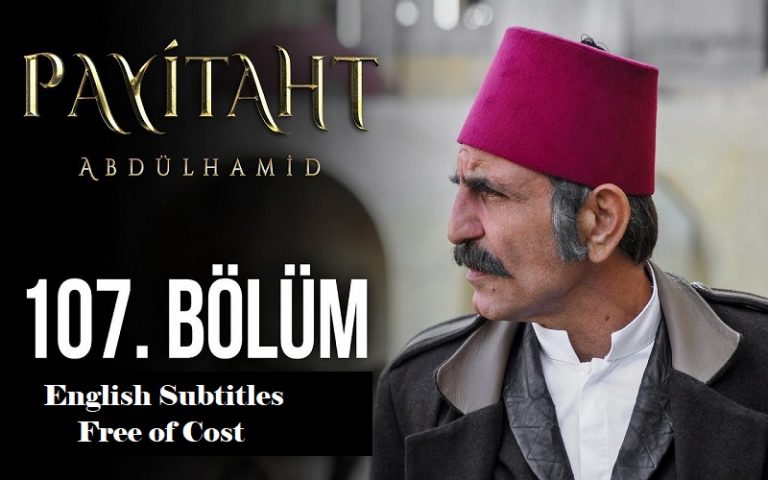 In Payitaht Abdulhamid Episode 106, George Efendi, the bank manager leaves the railway business because of opposition at the seaport. Naime Sultan comes into a hotel which will be the blast. But Gulcemal suddenly reaches there after Naime Sultan. After viewing this, Madame Blavatsky instructs to save Gulcemal after stopping the explosion. Meanwhile, Gulcemal and Naime Sultan are in waiting to make a meeting with Shehzad Abdulkadir, but he already had left the place. Anna runs to stop blast and at the last moment, she stops the bomb blasting. Hunkar needs money for the railway business. Then he decides to change the decision of George Efendi.

In Payitaht Abdulhamid Episode 106, Mahmud Pasha tries to agree with the British coordinate for the railroad. Mr. Zalman and his companions decide to continue chaos inside the city and to make the railroad. On the other side, Halil Halid meets Payithat and describes the whole story of the other agent. Sultan Abdulhamid orders Zulfet Kalfa to catch Bidar from the cottage and comes back with her in the palace. Hunkar waits to know the secret after dervish’s death. Zalman stops Abdulhamid from reaching secret. Halil Halid meets Hunkar and explains his duties in the palace.

In Payitaht Abdulhamid Episode 106, Sabahuddin and Karasa meet Frida and says her to deceit to women in the organization. Hunkar gives raise and sends presents to employees of the government. Mahmud Pasha talks to George Efendi and tells him about the two states’ partnership may be left. Makhtar joins a worker in the office to an area by car. Zuluflu Ismail meets Muhammad Pasha and says what’s going? Mahmud Pasha asks what should to do for the state officers and Germans. The officer is killed by Makhtar in the jungle. Bidar meets back in the palace to Naime to talk. Bidar also talks to Hunkar. She says why she couldn’t come to camp and also tells not to go for long to wait. Hunkar forgives Bidar but Bidar waits for that.

In Payitaht Abdulhamid Episode 106, Zuluflu Pasha meets Zalman and says about the movements of Abdulhamid. Ahmed Pasha enters in the royal residence and tells Hunkar about the murder of the officer. Zalman makes a plan to invade the Ottoman bundle to dry the sources of Abdulhamid. Madame Blavatsky comes to know that the bomb was captured by police that they placed there. Meanwhile, Cemile comes to meet Madame. While Madame gets furious due to her failed plan. During this Cemile Sultan, talks to her and asks what happened? Madame feels fear and lies. Halil Halid took Ziya Sami in the Garden and compel him to come out in point. He confesses that he killed. Cemile decides to tell each and everything to Hunkar. Ahmed Pasha went to the crime spot and talked to the police. While they were discussing murder, another officer came and told about two other murders.

In Payitaht Abdulhamid Episode 106, Mr. Zalman is joyful about Makhtar’s job. Madame invites Marco to keep silent to Cemile Sultan. Mahmud Pasha meets George and gives a file. George Efendi didn’t believe but Mahmud Pasha tells he doesn’t know about the mind of Padishah. Ahmed again goes to the crime spot and finds out a button in the hand of the dead body. Halil Halid takes Ziya to a square area and catches his neck with a string. When Ziya is about to expire, a group of people come and save him. When Halil Halid sees the group of people, he stops and lets Ziya go with them. Hunkar hits a plan to show his property to the British so that he can prove economically strong. Similarly, other officers and Pashas also give their all property for the railroad. Gulcemal and Dilruba discuss Shehzade Abdulkadir. During their talking, Meziyet hears their discussion.

In Payitaht Abdulhamid Episode 106, Tatar Bey enters and tells he has no information yet. Ziya Sami discusses about his kidnappers. He knows very well the name of Yanik but he doesn’t point out him. Then he reminds his friends and waits for them. Tahsin Pasha tells about fundraising to other Pashas. Ahmed Pasha enters into the palace and informs related to murders. Ahmed Pasha displays the button that he finds from the killing spot. This button was the button of a sleeve of Pashas. Tatar Bey enters and tells the name of Yanik Kasim. Gulcemal meets Cemile Sultan and saying of Cemile affects on her. After listening, Meziyet discusses Dilruba and says she will describe each and everything to Abdulkadir. Zulfet Kalfa takes the dinner which is done by Bidar for Hunkar.

In Payitaht Abdulhamid Episode 106, On the other side, she is thinking that Hunkar will not take food with them. Halil Halid with their men goes for searching Yanik Kasim. Madame Blavatsky gets furious at Gulcemal due to the failure plan. Gulcemal comes to know that Cemile may be killed. Halil Halid invades the warehouse to kill Ziya Sami but at the last moment, he escapes. Bidar talks to Hunkar and says to give her permission for opening a soup kitchen. Gulcemal informs Cemile Sultan to take rest but Cemile doesn’t agree with this. Halil Halid announces an announcement of returning Payitaht and helping people. British officers meet Zalman and discuss related to the railway. Zalman tells that Abdulhamid and Pashas have spent his all money on the railroad. On the other side, the footprints match the shoes that are worn by Pashas. Hunkar and Ahmed assume that Pasha may be committed murder. The ambassador enters to palace and wishes to become a partner of the railway business. But Hunkar refused.

In Payitaht Abdulhamid Episode 106, Cemile Sultan feels illness and goes to the room for rest. But this is just a lame excuse to check her husband. Zeki Pasha, tells Hunkar about the all money legacy. Zalman is ready for an assault. Zalman and Makhtar make plans ready to attack. Cemile Sultan enters that place where she meets her husband. Meanwhile, Cemile is walking, she fells down which is a hidden trap. Bidar Sultan wishes to inform Hunkar, but Madame stops her after receiving the message from Cemile Sultan. Halil Halid attacks at Ziya Sami and catches him. Ismail Hakki and Ahmed meet at the meeting place meanwhile, Makhtar blasts the building even they are also there. Ziya Sami is dead. Tahsin Pasha informs Hunkar about the blasting of the meeting place and the presence of Hakki and Ahmed Pasha inside of place.

Without ads, permanent access to Payitaht Abdulhamid Season 4 Episode 107 and many more can be achieved by subscribing membership on Multipoint TV by Clicking below button.