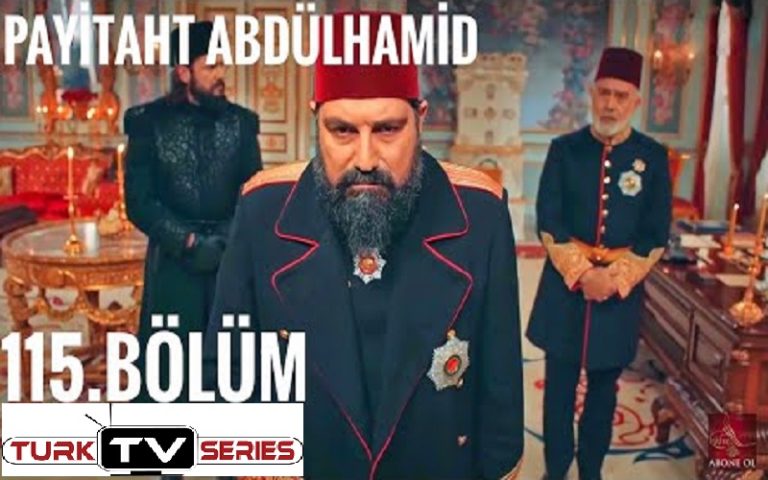 In Payitaht Abdulhamid Episode 114, Abdulhamid sends soldiers to Aqaba based on legal proof. When Hunkar is discussing to Tahsin Pasha, news comes that Mahmud Pasha has run away. Ahmad Pasha says to Abdulhamid that Mahmud Pasha might be possible is an innocent person, but Hunkar keeps doubt. Hunkar wishes to send Brain and Robert safely to an Island. Hechler gets angary on his defeat. While Goldschmidt asks permission to kill Brain as he knows where is he. But Hechler says he wants to use Brain as much as possible, and after that, I will kill him.

In Payitaht Abdulhamid Episode 114, It comes to know that Hechler has snatched dynamite from the boat. When Halil Halid with his agents leaves the boat, then they look a group of troops. Halal Halid goes to that soldier and talks to soldiers. The soldier tells that these dynamites are related to the services of military school. Mahmud Pasha meets Frida and says he has mistrust on Zuluflu Pasha. Meanwhile, Frida asks him that I am the daughter of Karasu and I will help you. Bidar Sultan looks Naime is coming in Palace sadly and asks the reason from Gulcemal. Halil Halid meets Ahmed Pasha related to the agreement, and then he informs Ahmed Pasha what he saw in the port. Goldschmidt reaches the dynamites place and talks to Namik. He kills troopers who present dynamites.

In Payitaht Abdulhamid Episode 114, Bidar Sultan gets angry with Zekiye because she thinks Zekiye sent the message from Kemalettin to Naime. But Zekiye refused about this message. Mahmud Pasha meets Ismail Pasha and informs him that I am innocent. Mahmud Pasha tells that Tahsin Pasha had made him fallen into these circumstances. Hunkar and Tahsin Pasha talk related to the disloyalty of Mahmud Pasha. Hunkers appreciates Tahsin Pasha due to his honesty. When Ismail Pasha is going to Palace to give the news to Mahmud Pasha, Frida comes and tells him the plan of Mahmud Pasha. Bidar Sultan meets her daughter Naime and asks the question, but Naime refuses that she met Kemalettin. Ahmed Pasha goes to Mr. Brain and tells him he will transfer him somewhere. Halil Halid meets Tatar and discusses about the troopers at the port.

In Payitaht Abdulhamid Episode 114, Goldschmidt informs Hechler about what happened in the port. Hechler hands over a pistol and says him to give it to Robert. Ismail Pasha returns home and Ahmad Pasha thinks that Ismail didn’t report him. Ahmed Pasha hands over some money to Robert and Brain, and Goldschmidt with his men attacks them when they are going to send them. Selim picks Brain and set off. Robert talks Goldschmidt in the street secretly. Goldschmidt hands over the pistol to Robert and says him to kill hunker. Robert says it is impossible. Frida meets Hechler, he tells her that Robert will kill Mahmud Pasha. Madame Blavatsky keeps making plans related to buying of stores near the Mosque of Al Aqsa. Andre, who introduces biological weapons and wants to spread an epidemic disease in the territory of the Ottoman. Tatar meets Halil Halid and says he has found a house for them. Halil Halid with his agents goes to that house.

In Payitaht Abdulhamid Episode 114, Ahmed Pasha meets Hunkar and discusses about the invade. Goldschmidt informs Hechler that he couldn’t deliver the pistol to Robert, but Hechler speaks he has planned everything. Soghutlu and Halil Halid go to the burial of the killed men, but Namik goes there and says to them you are responsible. Halil Halid starts to chase Namik. Tahsin Pasha says Hunkar to sign on some documents. The documents are about to not receiving salary anymore, Hunkar asks the reason and they begin talking. Zuluflu Ismail meets Hechler secretly. Hechler hands over him a box of weapons and orders him to give it to Robert. Halil Halid with his agents enters the house to find out the dynamite. Shehzade Abdulkhadir misses Meziyet and Naime comes to know this situation. Ismail Pasha goes to Robert and gives him that box without seeing inside the box. Diana received a message from Goldschmidt to publish it to the newspaper.

In Payitaht Abdulhamid Episode 114, When Hunkar with his Pashes is walking in the garden, Robert is in waiting for suitable moments to kill, and he shoots from the gun and everyone in the Palace hears the voice of gun. Zulfet informs that Hunkar has been killed. Soldiers meet Halil Halid and inform that someone ran a gun at the palace. Halil Halid reaches in the palace. All the newspapers publish that Sultan Abdulahmid has died. Ahmed Pasha brings Halil Halid at the chamber of Hunkar and tells that Hunkar does not die, and tells Robert is a betrayer. Hunkar meets Halil Halid and talks about dynamites. Later Hunkar comes to know the news about his death, and he says he will come in the front of the public to show the truth. Hunkar sends his troops to Dolmabahce palace to stop his heir of making revolution. Hechler comes to Hunker and talks related to Aqaba and says to pull out soldiers from there.

In Payitaht Abdulhamid Episode 114, Goldschmidt hands over the dynamites to Namik and says him to keep them in the mosque. Hechler talks to Frida and says her to bring Mahmud to the port. Bidar Sultan distributes aid to tell everyone that Hunkar is alive. Andre with Madame gives medicine to the people who were abducted. He says this virus will spread soon on Payitaht. Frida meets Mahmud Pasha and says to him that she will help him to escape by a ship, but someone transfers this news to the palace. Selim and Ahmed Pasha go to the port and starts to wait for Mahmud Pasha. Mahmud Pasha arrives and enters a big box one of all boxes. As Ahmed Pasha goes to Mahmud Pasha, the box blasts. Ahmed pasha goes back to Hunkar and informs about the event and says the body they find is unable to recognize.

In Payitaht Abdulhamid Episode 114, Naime sends an agent to the house in search of who lives that house. Hunkar orders for the funeral of Mahmud Pasha. Halil halid thinks that dynamites may be caused by the death of Mahmud Pasha. An agent informs Naime that Ali Nureddin pays the rent. Goldschmidt becomes excited to hear that Hunkar and officials state they will be killed in the mosque. Hechler stops Ismail Pasha to go funeral. Ismail Pasha says to hunker that he is not feeling well and wants to stay at the palace. Asaf captures Namik and comes to know the blast in the mosque. Asaf runs fast and informs Halil Halid. On the way of the mosque, Tahsin Pasha and Hunkar speak related to Sabahaddin.

Without ads, permanent access to Payitaht Abdulhamid Season 4 Episode 115 and many more can be achieved by subscribing membership on Multipoint TV by Clicking below button.

Have you Enjoyed Episode 115?