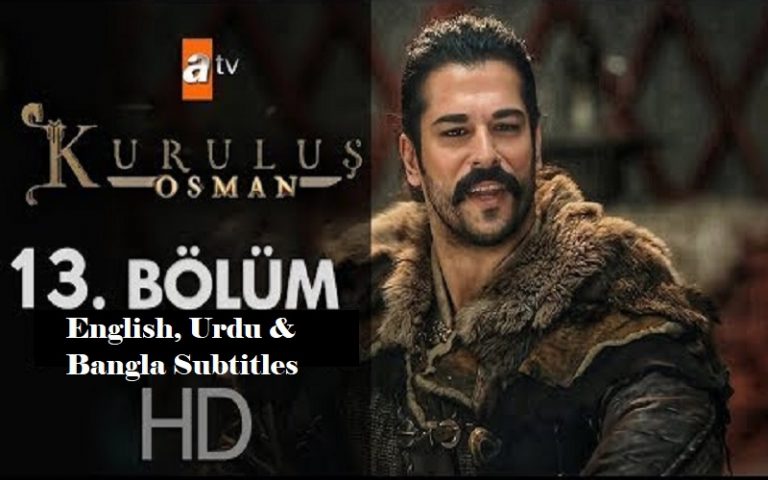 Before watching Kurulus Osman Episode 13 English with English Subtitles. Refresh the story that what happened In Kurulus Osman Episode 12. Commander Balgay and Mongolian soldiers invaded the plain. Selcan Hatun brought kumis to poison Balgay, but he was suspected of the drink. Balgay tried to force Selcan Hatun to drink it, but Selcan Hatun did not. Commander Balgay was very angry and attacked Selcan Hatun. Dundar Bey and Gunduz Bey tried to stop him. Balgay was still angry and took Gunduz out of the tent. Bamsi and the soldiers are already prepared to intervene and the Kayi soldiers started to attack. Balgay asked Dundar Bey to stop Turkish soldiers, but Dundar Bey did not listen to him and ordered to attack. Meanwhile, Osman Bey came to the plain and came across Balgay. Balgay couldn’t make any sense why Osman Bey came. Osman Bey approached Balgay and said he wanted to make a deal to him. Later, a message from the Mongolian commander in Konya stopped Balgay. Osman Bey handed the dagger of Genghis Khan to Balgay and said that he had Genghis Khan’s laws. Meanwhile, in the castle, Efendi Yannis and Princess Sophia talked about what happened and were angry at Osman due to what happened to Alisar Bey.

In Kurulus Osman Episode 12, the only way out for them is to use Commander Balgay. But Efendi Yannis decided to use Salvador. Balgay looked at the dagger for a long time and decided that this dagger really belongs to Genghis Khan. Balgay and Osman started talking about the dagger, but Osman Bey kept it a secret how he found the dagger. Balgay wanted the laws of Genghis Khan from Osman to be more powerful. Osman Bey said that he would give Genghis Khan’s laws, but for this, Balgay had to release the Turkish soldiers he caught and leave the plain. Balgay said he would accept these conditions, but Osman asked Balgay to make a promise in front of the Beys in the plain. Then the Beys in the plain came to the tent and listened to Commander Balgay. Osman Bey’s arrival to the plain gave hope to the Turkish prisoners and all the people of the Kayi tribe.

Yannis and Princess Sophia continued to torment Salvador to make him speak, and eventually, Salvador said he would do whatever they wanted. Osman Bey and Bamsi Bey started talking. Bamsi Bey wondered where the laws of Genghis Khan came from and asked Osman questions about this issue. Osman Bey did not answer the successive questions and left the tent. Balgay began to think while waiting for Osman to bring the laws of Genghis Khan. He could not understand where and how Osman took Genghis Khan’s laws, but he continued to make treacherous plans as this would make him even stronger in the future. Osman Bey met white-bearded men in a secret place in the forest and told them that Balgay believed him. Soon after, Osman Bey went to Salvador and asked what was happening at the castle In Kurulus Osman Episode 12.

Salvador said that Efendi Yannis and Princess Sophia believed him and that his secret plans worked. Osman Bey told Salvador that he would save the plain from the Balgay and Mongolian invasion and forward it to Efendi Yannis. Salvador set out to return to the castle, Osman Bey was upset about Salvador’s situation, but this secret plan had to continue for the future and liberation of the Kayi plain. When Kongar started to torture Turkish prisoners, Konur was deliberately annoyed him and caught his attention. Kongar could not stand the words of Konur more and started to fight with him. During the fight, Konur saw the mark on Kongar’s neck and stopped. Konur began to think that Kongar might be his brother. Osman Bey went to the secret cave and met with Sheikh Edebali. Osman Bey said he would save his plain. Sheikh Edebali told Osman Bey a story about the Prophet so that he could learn something. After this story, Osman Bey took the chest that Genghis Khan’s laws in it and set out to go to the plain.

In Kurulus Osman Episode 12, At an unexpected moment, Princess Sophia came to the plain and entered the tent of the Turkish prisoners. Sophia tried to make fun of the prisoners, but Selcan Hatun’s words disturbed her. Meanwhile, Dundar Bey learned that Sophia had arrived, but Mongolian soldiers did not allow him to leave his tent. Zohre Hatun told her husband that he had to do something and argued with him. Sophia came crawling to Balgay and asked him why he didn’t kill Osman Bey. Sophia said Osman did not have the laws of Genghis Khan and that everything was a lie. However, Balgay’s ideas have not changed. Balgay told Sophia that he wanted to learn all the information about Byzantium and would not break the deal they made. Osman Bey reached the plain and entered Balgay’s tent. Later, Osman Bey handed over the laws of Genghis Khan to Balgay and asked him to comply with the agreement they made. Seeing Osman Bey entering the tent, Bamsi Bey and Turkish soldiers went to war position and started to wait because of the possibility of a fight. Balgay kept his promise to Osman. Balgay released the Turkish prisoners and left the plain. Dundar Bey came to Osman Bey and asked what Balgay was going.

In Kurulus Osman Episode 12, Osman’s doing secret work disturbed Dundar Bey very much. Dundar Bey told Osman Bey that he did not want any more trouble, but Osman Bey was angry with his uncle. The debate between Dundar Bey and Osman Bey grew. Osman Bey asked Dundar Bey to stop managing the plain. Hearing this, Dundar Bey got very angry and ordered him to explain what he had done at the meeting to be held that same evening. Salvador came to the castle and started talking to Efendi Yannis. Salvador said that Osman Bey had the laws of Genghis Khan and would use it to save his plain. Hearing this news, Yannis became very angry and started to think about where Osman Bey got the laws of Genghis Khan. Salvador said that everything was because of Sheikh Edebali, but Yannis thought there was someone else to help Osman Bey. Salvador told Efendi Yannis that he knew where Sheikh Edebali is to make himself to be forgiven. Bala Hatun went to Osman Bey’s tent and asked him how he sent the Mongols from the plain. Osman Bey said that this is a secret and should remain a secret. Bala Hatun was very angry with Osman Bey hiding a secret from her and left the tent. The released Beys came to Osman Bey. Samsa asked Osman Bey about the laws of Genghis Khan, but Osman Bey also told him that it was a secret. This made Samsa Bey very uncomfortable and said that having a secret between them would harm them. Osman Bey’s decision has not changed. Samsa Bey said that he would no longer be with Osman Bey and would return to his plain. Commander Balgay and Mongolian soldiers returned to the inn and started celebrating because they obtained the laws of Genghis Khan.

The meeting started under the leadership of Dundar Bey. Other Beys in the plain said that they were disturbed by what Osman Bey had done and Osman Bey was responsible for all events. Osman Bey tried to defend himself and said that if they fight together, they will defeat the Mongols. The Beys who heard these objected Osman Bey. Dundar Bey and the Beys in the plain wanted one thing, and that was peace. Osman Bey said that war is inevitable and it is necessary to fight now. The Beys told Dundar Bey that they wanted Osman to be exiled. Dundar Bey asked what Bamsi Bey and Abdurrahman Ghazi thought about this decision. Bamsi Bey and Abdurrahman Ghazi approved the exile decision In Kurulus Osman Episode 12. This angered Batur and said that if Osman Bey was to be exiled, he would go with him along the plain. Meanwhile, Konur was thinking about his brother and prayed to Allah for him. Boran came to the other alps and told them of the exile decision. There was nothing else to do for Osman Bey and his alps anymore. After the meeting, Selcan Hatun came to Bamsi Bey and asked why he made such a decision.

In Kurulus Osman Episode 12, Bamsi Bey said that no matter how sad, this situation would be better for Osman Bey. Osman Bey prayed to Allah in his tent. Selcan Hatun told Osman Bey that she was sad and worried about the exile decision. Osman Bey told her that she should not be sad and everything would be better. Batur prepared to leave the Kayi plain and spoke to his family. Zohre did not want Batur to go, but there was nothing to do. Dundar Bey was still angry because of his son’s decision and said he forgave his other son Bahadir. After this decision, Bahadir will come back to the plain. Osman Bey and his soldiers go to the plain of Samsa. Osman Bey wanted to talk to Samsa Bey, but Samsa told Osman Bey that there should be no secret between them. The trust between Samsa and Osman has disappeared. Samsa Bey said that Osman Bey was not mature enough and started fighting each other. Osman Bey put his knife in Samsa’s neck and said that he shouldn’t rebel against him or everyone will rebel in the slightest setback. Let see what will happen in Kurulus Osman Episode 13 and how Osman act in his exile and what are the plans.

To know about all these questions, you need to watch episode 13 of Osman on multipointtv.com without any ads.

Those who are searching for watching Kurulus Osman episode 13 with English subtitles in Ultra HD 1080 resolution free of cost, Click below black colored button.

Have you Enjoyed Episode 13? 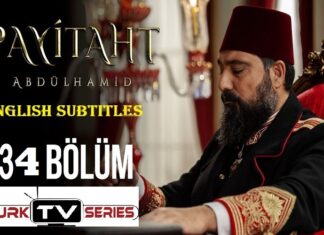