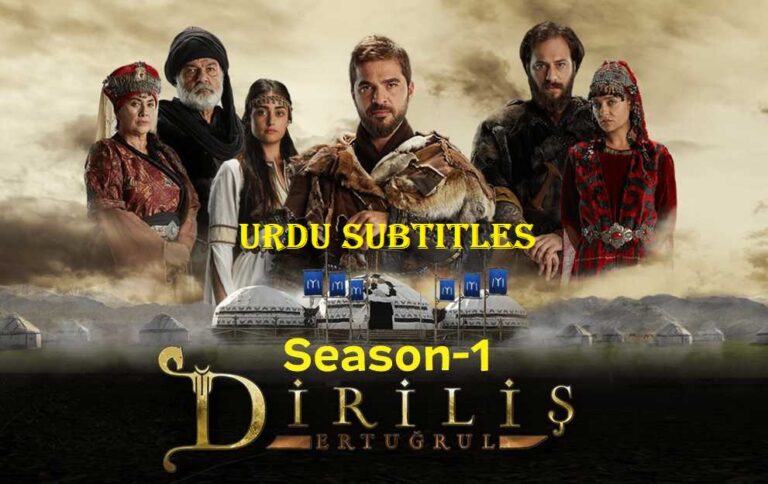 In 1225, the shortage of supply of food and famine in the Kayi tribe. The son of Suleman Shah, Gundugdu Bey suggested migrating to Aleppo. This idea is accepted by Suleman Shah Ertugrul Bey with his friends who went on hunting and he saved an innocent from the soldiers of Crusade. Ertugrul Bey brings back family to the tribe. Commander Seljuk demands that family from the Kayis. But Suleyman Shah didn’t accept his demand and sent his Ertugrul to Aleppo. Ertugrul Bey with his friends reaches in Aleppo and he makes a strong to get up a piece of land in Aleppo. However, Halime Sultan with her family is in trouble because some people try to kidnap them.

In Dirilis Ertugrul Season 1, Kurtoglu tells that Ertugrul Bey has killed the many Alps of the tribe and he tried that night to kill Ertugrul Bey’s father. Someone tried to attack Ertugrul but Halime saved him without caring for her life. At that time, a disease plague is spread everywhere in the plain. Knights of the templar caught Shehzade and Turgut Alp. There was a betrayer in Aleppo and who is he? Nobody knows. Ertugrul Bey meets secretly with Ata Bey and someone invades him. Ata Bey summons in court and he is found guilty of false evidence by the testimony. Ertugrul Bey with his close friend saves Ata Bey from hanging and captured him. Halime Sultan becomes ill. Ertugrul Bey with Ata Bey inquires the evidence that speaks in court. Knights Templar plans to give poison to draw Turgut Alp. The tribe comes to know that Ertugrul has been arrested and prisoned.

In Dirilis Ertugrul Season 1, Suleyman Shah goes Aleppo with some Alps. But Ertugroul runs away from the imprisonment. Turgut Bey helps with a woman due to run away from the confinement. Ertugrul bey with Atabey goes back to his plain. Suleyman Shah gets an order to leave the place from Aleppo. Ertugrul Bey decides to go Aleppo again with a Christian concubine. Ertugrul and Gundogdu invade the Knights Templar on the way of Aleppo. Meanwhile, Kurtoglu plans to kill Suleyman Shah secretly. Al-Aziz purposes Halime Sultan. Halime Sultan says she agrees if you will return my brother. Al-Aziz accepts this and returns her brother. Ertugrul Bey is in full determination to save his beloved lady. However, Nasir readies the Turk men to revolt in opposite to Sultan Aladdin to become the Sultan of Seljuk for Numan. At the last moments, Halime gives up to get married. Kurtoglu goes to Ustad and plans a secret plan.

In Dirilis Ertugrul Season 1, The baby of Selcan Hatun has died and Gundogdu is considered responsible for Aykiz. Meanwhile, Al-Aziz is bringing Halime Sultan to the hunting, Ertugrul reaches to save Halime but he is entangled. The plan of rebellion by Al-Aziz is missed due to the imprisonment of Nasir by Ertugrul Bey. While some Alps comes and save Ertugrul Bey. The Knights Templar says Kurtoglu to invade the Orthodox. Ertugrul Bey rescues the life of Ibn Arabi. Ertugrul Bey comes to know the place of the Knights templar by Aykiz. Kurtoglu decides a new plane after making Gundugdu the new leader. While Titus efforts to murder Ata Bey. When Ertugrul with his Alps goes to rescue Turgut, a trunk brought by Aleppo. The trunk consists of the head of Ata Bey. Ertugrul Bey gets back Turgut Bey in return of cardinal. But Turgut Bey attacks Ertugrul Bey and he also tries to murder of Bamsi. A fight starts between the Alps and Knights Templar and he takes Turgut back. Ertugrul Bey goes back to the plain in a very critical condition and everyone in the tribe comes to know that Turgut is dishonest.

In Dirilis Ertugrul Season 1, Kurtoglu planes to kill Ertugrul and send a man for the purpose but he fails. Gokce saves Ertugrul, after putting her life in trouble. A woman from the Christian tells the reality to Suleyman Shah related to Turgut. Ertugrul Bey learns that Kurtoglu is a traitor, but his brother Gundugdu speaks his uncle is not a traitor. Turgut bey is brought back to the plain by Gundugdu. The other Bey of tribes starts to stand which him due to the strong economic power. Suleyman Shah tired from his seat and wants a new Leader. Kurtoglu selects Gundugdu, but Gundugdu doesn’t accept it. Suleyman Shah becomes the Leader of the tribe once again. A poison is given to Gundugdu. Ertugrul Bey and Halime get married. Yigit is kidnapped again due to Kurtoglu. In the tribe a turmoil takes place and Kurtoglu nominates himself a new Leader of the tribe. Gundugdu goes to Kurtoglu. Suleyman Shah everyone in this tribe and says to go to their tents.

In Dirilis Ertugrul Season 1, A fight starts between Ertugrul and Knights Templars, but that was a trip. Ertugrul Bey with his Alps runs away from that trap. Kurtoglu offered some commission to Turgut to kill Ertugrul Bey father with his family. Kurtuglo plans a toy and orders the death sentence to Suleyman Shah with his sons. But on the other side, some Beys suggest to exile instead of death Decision. One man of Ibn Arabi saves Ertugrul Bey with the Alps. Kurtoglu sends Halime in jail to weak Ertugrul and banishes Suleyman Shah. When Turgut Bey is near to kill Suleyman, he comes into his senses and breaks down his chains. But Knights appear at the spot and trap them. Ertugrul bey with his Alps comes and helps them to save from him. Turgut Bey behaves just like he has done his duty and returns to Kurtoglu. Ertugrul Bey says to Kurtoglu to join Toy.

How to watch Resurrection Dirilis Ertugrul Season 1 with Urdu Subtitles

In Dirilis Ertugrul Season 1, Ertugrul Bey says that Kurtoglu collaborated with the Knights and Kara Toygar in Toy and summons Turgut Bey as evidence. Kurtoglu doesn’t agree and orders to catch Ertugrul. Ertugrul Turgut Alp catches Kurtoglu between a fight in the tent. Suleyman Shah comes back to his plain. Kurtoglu is given the punishment of death-sentenced. Cardinal plans to bring Yigit Shehzade to Constantinople. Selcan Hatun apologizes for her mistake from everyone. Ertugrul informs his father about the attack on the Knights Templar. Aykiz and Turgut get married. Suleyman Shah is on the way to war with his Alps. Ibn Arabi ‘s student will help internally from the castle. Ertugrul Bey reaches Titus with his Alps step by step. Yigit goes to Halime and informs that battle has been won by Kayis. The Alps go inside the castle and comes to know the preparation related to the future Muslim Christian war.

In Dirilis Ertugrul Season 1, The white beards men thought to add the Oghuz in preparation to come for the Mongols to Anatolia. Selcan tells Gundugdu about her pregnancy but her husband doesn’t trust her. Gundugdu sets off to find his wife. At that time Titus invades to kill Gundugdu, but his wife saves him. At the last of the season, Suleyman Shah meets with Oghuz Beys with his son. However, Ertugrul sets off to capture Titus. Ertugrul Bey catches Titus after a hard struggle. Gundugdu cuts the head of Titus. Suleyman Shah becomes ill on his way and he falls from the horse into the river and he dies. Mother Hyme decides to fight with the Mongols and prepares her Alps.