In Alparslan Buyuk Selcuklu Episode 5, Alp Arslan wanted to protect Atabey. But Atabey was captured by Lord. Alp Arslan with his friends run away towards the jungle. The soldiers of byzantine tried to catch Alp Arslan and his companions but they were killed by Alp Arslan. Akca came back to the tribe by using the private tunnel. Caghri came to know that somebody is trying to assault sehver. Therefore, he went out with Suleiman.

Sehver was protected by Bozan from bandits. He told that the attack plan was made by the Shehzad. Sehver trusted Bozan for what he informed. And he thought wrong about Alp Arslan. Alp Arslan came back to the palace and he asked for the permission of the sultan to protect atabey. Inal informed that, alp arslan was sent to the inn by turghut.

Lord was planning to take a gladiator from Ani to quarrel with Hassan. Evdokya and General came to the palace. General asked about the redemption from Sultan for the sake of Hassan. Sultan came to know that alp Arslan had run away from the lodge. So, the sultan replied to General that he would not give any payment unless a message came about him. A fire was made by alp Arslan in the jungle to give a signal with smoke to Alpagut.

Suleiman and Inal began to search alp Arslan in the jungle but they were stopped by caghri. Inal came to the palace and informed the sultan about the caghri that he was protecting Alp Arslan. Sultan commanded to bring his older brother into the palace quickly. One of the byzantine soldiers was killed by alp Arslan. And he took his dress. By using this way, alp Arslan privately entered the castle.

Alpagut told that a fighter will come into the castle. Alp Arslan took immediate action. When Yannis left the lodge, a gladiator was captured by the Alp Arslan and he seized his helmet. Yannis had not known that in actual the alp Arslan was a gladiator. Yannis came to the lodge with alp arslan. When Hassan left his chamber, Yannis was captured by alp Arslan. And he transformed Yannis’ clothes.

In the place of Hassan, Yannis came to the ground and began to fight with the fighter. He was killed by Lord. But when Lord removed his helmet, he came to know that he was Yannis and he murdered him.

Alparslan Buyuk Selcuklu Episode 5 English Subtitle is available to watch for free. Click on the Black button below trailer to Watch Full Episode. 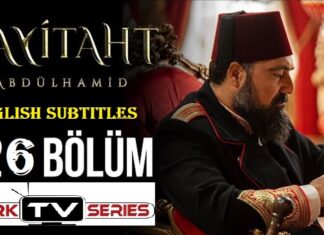