In Alparslan Buyuk Selcuklu Episode 22, Rati went to the city to murder Alparslan and invaded him. The Village folks  began to rescue Alparslan. Ivan was severely wounded. Alparslan got wounds on his wrist, but he took Afsin to the tribe. Akca said that the cut on Alparslan’s hand was very severe and this  would create difficulty for him to hold the sword again.

Alparslan was very worried about this condition. Nestor spotted a number of lifeless bodies of Byzantine warriors in the woods, so Diogenes noticed that the emperor was lying. Alpagu put the message out of the sight that Karaca wrote and made Akca aware about it. After Ferzat’s message, Yinal checked into the woods and said he would provide him what he needed. Alparslan arrived at the headquarters after some time and sent an invitation to Kekaumenos of headquarters. Lord secretly left the palace but Rati began chasing him.

Lord said that the subways that Alparslan indicated were just a legend and left to come back to the palace. Rati got aware that Lord was a betrayer. He cheated with the Turks and invaded him, but Alparslan saved his friend’s life. The Lord said that the castle was no longer safe for him and could not go to the castle anymore and arrived at the tribe with Alparslan.

Diogenes found out that the Lord was a cheater and started to look for the deal he had hiddenly made. Biruni made a new potion for Alparslan’s wounded wrist. Akca said that Karaca’s message failed and warned her. When Karaca was coming back to her tent, she found out the blood on her dress and observed that she had got miscarriage.

Alpagut arrived to see his mother that night and asked for forgiveness to her many times. The next day, Alparslan checked in to the entrance of the secret subways with the Lord and began to stuff it with war materials. Rati and Diogenes stuffed  the entrance of the subway with gunpowder. While Kekaumenos was struggling to warn Alparslan, there was a big blast and the Turks were stuck in the tunnel.

Alparslan Buyuk Selcuklu Episode 22 English Subtitle is available to watch for free. Click on the Black button below trailer to Watch Full Episode. 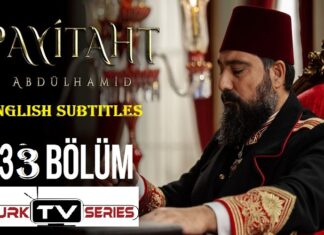